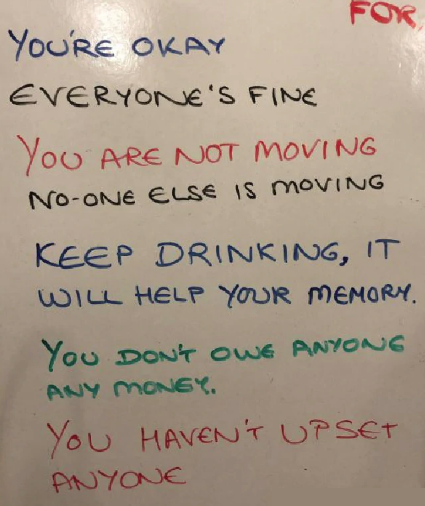 You might want to grab some tissues before reading this.

A touching note a daughter wrote for her mum with dementia has gone viral, leaving people opening up about the tragic realities of loving someone with the condition, that causes debilitating memory loss.

The heartwarming “words of reassurance” lovingly scrawled on a whiteboard were recently shared on Reddit.

The list included reminders for her elderly and forgetful mum that told her, “Your meals are paid for”, “You don’t owe anyone any money”, and “You haven’t upset anyone”.

The sign was then placed in a spot her confused mum could see it whenever she struggled with her memory.

“A simple white board left in her sight line in her sitting room helped to reduce constant anxious phone calls,” the post read.

It didn’t take long for the comments to pour in where people dubbed it both “sweet” and “heartbreaking”.

Mostly it struck a cord with those who’ve witnessed their own loved ones living with the dementia — the overall term that describes a group of symptoms associated with a decline in memory.

“Having worked with many dementia patients I’ve seen the constant anxiety that some of them get and would not wish that on my worst enemy,” one user wrote.

“This reminds me of my great grandmother that suffers from dementia. It is so hard not to cry but I try my best not to,” someone replied.

Another said: “This hits close to home … for the last few years of my dad’s life, we would have these conversations like this, where he would worry about these things.”

While it’s not known who shared the image, it appears to be another caregiver of the elderly woman.

According to Dementia Australia, the condition is the second leading cause of death of Australians.

The organisation estimated in 2018 that there are 436,366 Australians living with dementia, requiring care from 1.5 million people.

Earlier this month it was reported a hormone released during exercise may protect the brain against Alzheimer’s disease.

The full list of thoughtful messages for her mum with dementia is here:

— Your meals are paid for

— You are not moving

— No-one else is moving

— Keep drinking, it will help your memory

— You don’t owe anyone any money

— You haven’t upset anyone